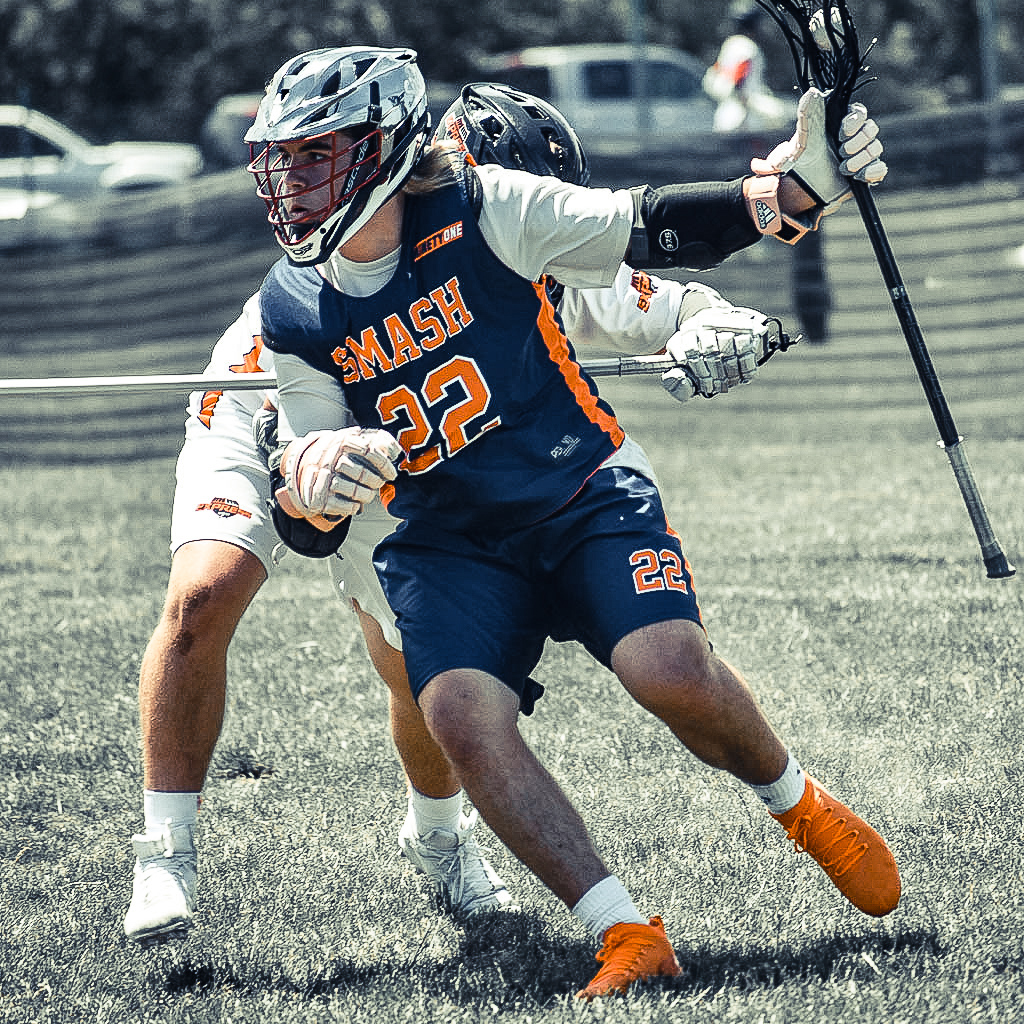 Team 91 Smash standout Joey Spallina is the No. 1 recruit in the class of 2022. Photo via Matt Chandik.

Sal LoCascio had watched Joey Spallina play extensively when Spallina played up two years with the vaunted Team 91 2020 Crush team that racked up tournament championships on a seemingly weekly basis.

LoCascio, a U.S. Lacrosse Hall of Famer and former Major League Lacrosse Coach of the Year, immediately noticed the traits that jump out to anyone watching the Mount Sinai (N.Y.) sophomore, but it wasn’t until after Spallina started playing against players his own age for LoCascio’s 2022 Smash team that LoCascio really picked up all of the little things that Spallina also brought to the table.

“His skill level is amazing and his vision is incredible. There’s nothing that he can’t do on the field,” LoCascio said. “What I didn’t know about Joey is how great of a leader he is and how he does the little things. There is no harder-riding attackman, and he gives every ounce of energy to doing the little things. There are some really good players in the ’22 class, but there’s Joey and then there’s everybody else in the age group.”

“His teammates love him because he always makes the right play,” LoCascio continued. “If the defense doubles him, the pass will be in your stick. It might come at you between the legs or behind the back, but if you’re open, Joey’s going to find you. It’s taken some kids a little bit of time to adjust to that, actually. Joey will see that they’re open and they don’t even know that they’re open.”

In very much the same vein that Crush teammates Brennan O’Neill (St. Anthony’s, N.Y. / Duke) and Andrew McAdorey (St. Anthony’s) were unanimous selections as the No. 1 prospects in the inaugural NLF rankings for the 2020 and 2021 class, respectively, Spallina was the clear-cut choice as the class of 2022’s top dog. As an eighth-grader two years ago, he put up 39 goals and 45 assists for Mount Sinai. He followed it up with a ridiculous 131-point campaign split down the middle with 65 goals and 66 assists, albeit one that came up short of his ultimate goal of a state title.

Instead of enjoying the fact that he has the state of New York’s all-time points record dead to rights, Spallina’s been focusing on the Suffolk County final loss to rival Shoreham-Wading River.

“I’m up every morning at 5:30 to go to the gym with my dad (Crush and Stony Brook women’s coach Joe Spallina) to try to become a better athlete,” Spallina said. “I still have nightmares about that game, and it motivates the heck out of me to get over that hump to get my team and my school to the next level. What drives me is to be a three-time state champ and a four-time All-American. I want to make my teammates around my better. I don’t like to be the guy who has to score a lot and not have a lot of assists. I’d much rather have 10 assists and get guys involved in the game.”

The Crush’s run came to a fitting end with a rout in the 2020 title game at the NLF National Championships, which means that Spallina now heads back to playing against players his own age in the ’22 class. This summer, he helped Smash collect three championships, including the NLF Opening Weekend, and there’s little doubt that it will continue to be one of the best teams in the nation for the next two years.

“I feel like playing up slowed the game down for me at my age level so much,” Spallina said. “With Crush, the game moves so much quicker than at my own age, so when I play against my age, I can control it and make it my own game.”

Not what you want to hear if you’re a Smash opponent.

Welcome to the first National Lacrosse Federation player rankings. We recently unveiled the class of 2021 top 50, as well as an honorable mention list, and we also dropped our class of 2020 top 50. This is the top 30 for the class of 2022, which caps our inaugural rankings.

Players must play for an NLF club or have played at the NLF Opening Weekend or NLF National Championships to be considered for the rankings, which was chosen in consultation with club coaches and college coaches, as well as in-person evaluations. The ’22 class features some major offensive threats, with six attackmen or midfielders in the top 10, as well as 16 of the top 30. Players from 13 states and Washington, D.C. made the list.

More than 50 players were considered for the top 30, and a list of some of the honorable mention names will be unveiled this week. The NLF draws the best players and teams in the country to its events, and many of the players on the rankings will be college lacrosse’s stars of tomorrow.