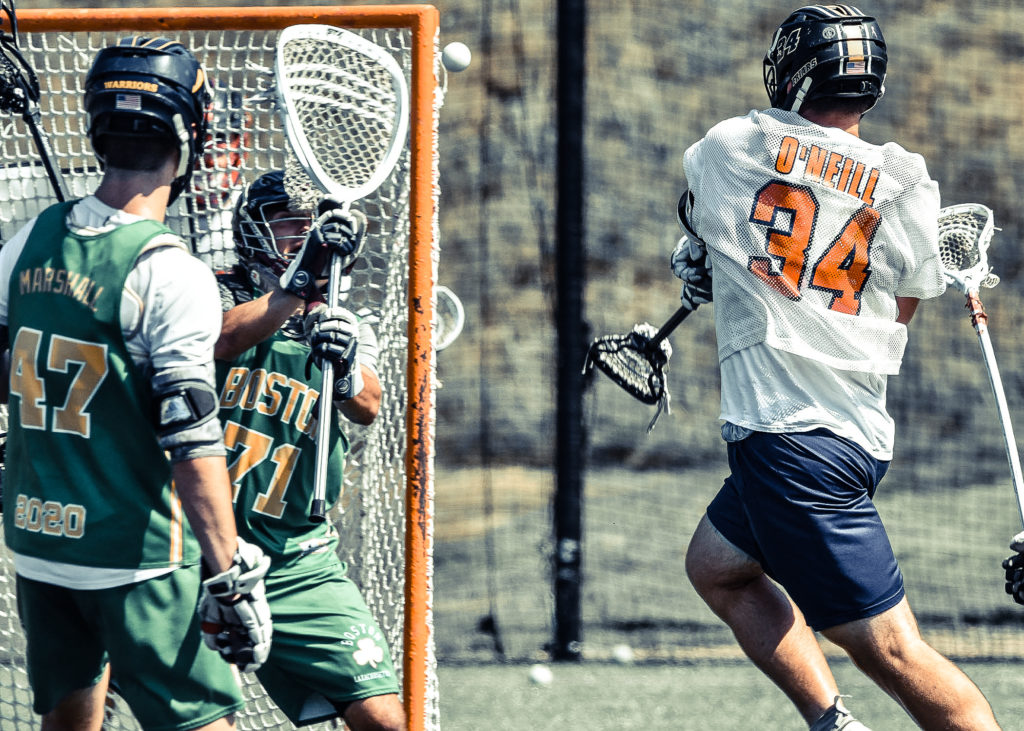 The hype started building up through Brennan O’Neill‘s youth lacrosse career with Team 91 Crush, a team that routinely played up against 2019 teams and still came away with win after win.

It continued when he became the youngest Division I commit in history as an eighth grader, added to it when he piled up a staggering 99 points on varsity as an eighth grader, and hasn’t stopped since, what with the constant social media reminders, jaw-dropping plays and monumental big-game performances. The most recent, a seven-goal, one-assist outburst vs. national power and rival Chaminade after tallying the same stat line in the 2018 NLF National Championship game, including the game-winning goal as time expired.

The most incredible part about all of the hype surrounding the St. Anthony’s senior isn’t that it often reached seemingly-absurd proportions. Rather, it’s the fact that he’s lived up to every bit of it. A 6-2, 225-pounder with elite stick skills, body control, lacrosse IQ, vision, the ability to try any shot and find teammates all over the field, O’Neill is a one-in-a-lifetime recruit, but this summer at the National Championships at UMass, the Duke commit only had one goal: win another national title.

“It was great to finish the way we started,” O’Neill said. “We knew that it wouldn’t be the same if we lost in our last time together, and we knew that it was our last chance to show what Crush is about and to seal the deal on us being one of the best club teams ever. Crush really helped me become the player that I am today, particularly getting coached like that, and I couldn’t see myself anywhere else.”

The decision to make O’Neill the No. 1 prospect in the class of 2020 in the inaugural National Lacrosse Federation rankings was as easy as it gets. While there are plenty of other incredibly-skilled players in the class, O’Neill is the total package, and he’s a sure bet to make a massive impact as a Blue Devil. He put forth a whopping 56-goal, 16-assist campaign as a junior for the 15-1 Friars, who arguably played the toughest schedule in the country. It’ll be hard to top that for an encore, but it won’t be for lack of trying from O’Neill and his teammates, which include Andrew McAdorey, the NLF No. 1 class of 2021 prospect, and Aidan Danenza, our No. 16 class of 2020 prospect.

“I want us to win every game and I don’t think we should lose,” O’Neill said. “Our goal is to come out the way we did last year. We want to beat Chaminade, of course, and we knew we should have in the first game. I think that loss really helped us along the way and helped us realize that we’re not unbeatable. Seeing that loss on our record was disappointing, but we knew we had another shot at revenge.”

Seven goals in the CHSAA championship game how are ya. Thanks for coming and drive home safe. #NotABigDeal 🎥: @news12varsity

Unfortunately for everybody else, O’Neill still feels like he can get a lot better, which is both terrifying and feasible.

Improbably enough, O’Neill has lived up to the enormous hype around him, and he’s just getting started.

“Brennan is a special talent that walks the walk every time he touches the field,” Crush coach Joe Spallina said. “There’s immense pressure on him and he handles it so well, and he’s simply a dominant player. Duke is getting an incredible player and person, and he’s as advertised.”

Welcome to the first National Lacrosse Federation player rankings. We recently unveiled the class of 2021 top 50, as well as an honorable mention list, and we’re continuing by unveiling our top 50 seniors in the class of 2020. The top 2022s list will follow to close out our inaugural rankings.

Players must play for an NLF club or have played at the NLF Opening Weekend or NLF National Championships to be considered for the rankings, which was chosen in consultation with club coaches and college coaches, as well as in-person evaluations. The class has a ton of offensive gamebreakers, particularly at the top, with six big-time scoring threats in the top 10 and 15 attackmen or midfielders in the top 25.

More than 100 players were considered for the top 50, and a list of some of the honorable mention names will be published soon. The NLF draws the best players and teams in the country to its events, and many of the players on the rankings will be college lacrosse’s stars of tomorrow.